People are not allow to shout at night because it’s rude and disrespectful to people who are sleeping. So people call out to customers by hitting sticks together and the echo sound is used for selling their noodles. People start selling the noodles at around 9:00 pm to midnight or sometimes later. At night you can notice them because there are two people, one is making noodles at the cart while the other one is finding customers by using the sound of their sticks. People who work at night or eat a late dinner can buy the dry rice noodles that are sold on the street.

Dry Rice Noodles is made into a noodle soup that consists of energy. It’s known in Khmer as “Kouy Teav”. Noodles are made of rice that have been crushed into powder and then remade into noodles. They can be served at breakfast, lunch, dinner and desert. They are several ways the noodles can be prepared: dry noodles, noodles soup with pork, beef, chicken…etc.

Mostly people sell the dry rice noodles on a moving cart or a standing cart along the street. The soup’s ingredients are specific to the owner’s cart – noodle, bowls, chopsticks or spoon, and sauce such as soy sauce, sugar, salt, pepper, ketchup and others.

Customers can order small, medium or a large bowls. Small bowls cost about 3500 riel while large bowls about 6000 riel. The sellers usually shout out loud for customer’s attention to their business during morning or afternoon. People like to eat this noodle soup because it is really delicious. I would recommend to try it if you can.

Samlor korko is one of the most popular traditional Khmer food dishes. It means stirring soup, but it is special vegetable soup with many greenness and leaves. Local legend has it that Samlor korko has been the king’s food for a longtime and there used to be nearly hundreds of vegetables and fruits were used for cooking the King’s special soup. However, Samlor karko has been changed from the 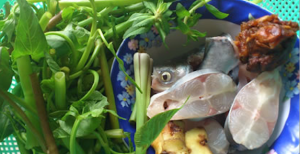 original recipe to be served in public. Typically, to make Samlor karko, you can choose any meat for cooking like fish, pork, chicken or dove. For fish the great taste is Chlang Fish & Andeang fish. Samlor karko has a great flavor if it is served hot. Cooking Samlor karko takes time because it takes a while to prepare all the vegetables as well as the Kroeung. Khmer people cook it very often though because it has a wonderful flavor. Traditionally,

people can create different recipes cooking this dish with adding of different vegetables or fruits such as the young palm fruit Kandieng Leaf or Kampinring Leaf which are great.

Clams are a kind of snack food here in Cambodia. Everyone here likes to eat clams with spices and more so with sausage, but that is more for a meal. 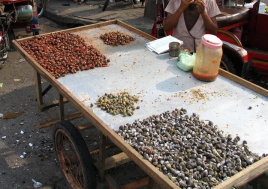 Generally, we can buy them from sellers who use carts to sell their clams. There are four flavors that can be easily found for street clams – plain (normal) clams, salt clams, spicy-chili clams and spicy-lemon clams. The spicy ones are best. 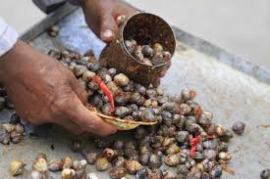 Cart sellers sell one can of clams for about 1500 riel. They can be found easily by the markets, like Central Market in Phnom Penh or down big streets. People tend to buy a can or two and bite them open and drop the shells on the street. They should be eaten it when the weather is hot because then the clams’ meat will be cooked. If they are eaten when the clams are still cool or have a strong smell, it will make people have a bad stomach.

Clams are easy to find in the river or tributary here in Cambodia. They are easy to make too. Just buy freshwater clams or catch them from the river and put into boiling water. You can take them out immediately cause clams don’t have blood so it is easy and fast to cook. Then just mix some ingredients like salt, chili or spicy lemon to make them delicious. After that, take them to dry under the sun until it hot enough (about 15 minutes) than you can eat.

Kralan is a snack that is made from Cambodia sticky rice cooked with coconut milk and soybean in a bamboo tube. Kralan is very popular for Cambodian people as well as for foreigners. We can find it

Here are the steps on how to make it.  First, we have to have all the ingredients like sticky rice, soy bean, coconut milk, sugar and salt. We have to soak the sticky rice and soybean for 2 hours then wash it with cleaned water. Secondly, take the bamboo tree to cut into pieces at it joints, so the tube has only one way out to put the rice. Then take the tube and clean it with water. The bamboo tree must be the bamboos that grow in village because it has long tubes, contains a lot of water and has white flesh inside the tube. Third, take the sticky rice and soybean and mix together with a little salt and sugar. Next, we have to put it into the tube and stuff it tight. If it is not tight, the kralan will become muddy. Then cover the tube surface with coconut hast or banana leaves – stuff these tight at the top. Last step, we have to take all the tubes that are filled with the sticky rice and ingredients to burn where the coals are spread in a long line.

There is a shelf in the middle that the bamboo tubes are placed on at both side of the fire. All sides of the tubes must face the fire, so it is well cooked. It takes about 35 to 50 minutes because we cannot use too strong of a fire. After it is well cooked, take it to be cooled and then remove the outer layer of the tubes, which were burned.

Finally, the Kralan is done and ready to eat!

Grilled bananas are bananas you take from a farm and grill using wood charcoal.

It tastes a little salty, as all the sweetness is gone – it is a dried out banana. They mostly sell them at huts or at the markets, but some people sell the grilled bananas by bike or moto carts.  At a cart, the grilled bananas cost 1000 riel (about 25 cents usd) for five bananas. The grilled bananas will not affect your health if you eat a lot of them. They are easy to buy every where in Phnom Penh. The other things you see on the grill are potatoes. They cost 500 riel each. The potatoes are smashed and then packed back together in a circle and grilled, they taste slightly sweet, but not traditional sweet. In short Cambodians like grilled banana so much, but especially me – I eat them before and during class everyday

AMOK is known as the most traditional dish of Cambodia. It is also known as “Steamed Curry Fish” or “AMOK Trei”. It is very famous for local people and for foreigners who want to taste Cambodian traditional cuisine. If you visit Cambodian restaurants, you may ask for a recommendation from the waitress or waiter. Almost ninety percent of them will recommend you to order AMOK since it is one of the most famous dishes in Cambodia. 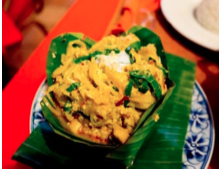 The ways that Cambodian people cook AMOK are not always the same. They have different ways to cook it in term of how they wrap the banana leaves with it. Normally, we use fish to cook Amok, however, we can use other meats like chicken, beef, and seafood (shrimp). Another secret ingredient is the aromatic mixture of Khmer Yellow Kroeung. Most people want to know why AMOK became so famous for foreigners. The reason is that AMOK is represented as Cambodian main dish. First, AMOK uses banana leaves instead of using plate; and banana is the Cambodian fruit. Cambodian people use a lot of banana leaves in many other food like for dessert (Khmer Sticky Rice-use banana leaves to wrap). Moreover, they even use the banana tree to make soup as well like Khmer sour soup “Morju Derm Jeck”. On the other hand, we have another ways to wrap AMOK. We can use coconut, snail shell, and plate instead of using banana leaves. Secondly, AMOK’s main ingredient is Cambodian freshwater fish. Cambodia has a large lake in the middle of the country and because of this enormous lake, Cambodian people have a ton of fish to eat and sell in both rainy and dry season. Moreover, Cambodian fish is tasty. In AMOK, we use Snakehead fish “Trei Ros”. When people see this fish, they know that it is from Cambodia. Lastly, AMOK uses the fresh and tasty ingredients. Those ingredients represent as Cambodian cuisine as well. In short, AMOK is the famous national dish of Cambodia because of its rich spicy combination of freshwater fish and fresh ingredients, it makes this dish become the soul of Khmer cuisine. Normally, Cambodian people usually cook Amok when they have a family party. The reason is that it has a lot of fun when we cook it; and to cook this dish, it demands the help from all family members. Apart from this, AMOK is also the main dish during Cambodian festivals like Water Festival, which celebrates to thank to Mekong River for providing Cambodian people with fertilized land and abundant fish.

How to Make It!

Firstly, we need to prepare those fresh ingredients including meat “Snakehead fish”, coconut milk, dried red chilies, Kaffir lime skin, lemongrass, garlic, egg, roasted crushed peanuts, shrimp paste, banana leaves, shallots, galangal, Krachai, turmeric, cilantro, Noni leaves, and red pepper. Secondly, it takes time to cook. We need to clean the fish first by using lemon and salt because they help to reduce the fishy smell and make the fish look fresh and clean. Cut the banana leaves into circles and make them look like a boat or box by folding the sides in and securing them with toothpicks. Mix dried red chilies, Kaffir lime skin, lemongrass, garlic, shallots, galangal, Krachai, turmeric together and put a little amount of shrimp paste into it; this is called Yellow Kroeung. Next cut red pepper into a flower shape, which we use to decorate the top of the AMOK. Then put the coconut milk and powder into a hotpot and mix them together. After, put the fish, Yellow Kroeung, egg, roasted crushed peanuts into the pot. Add a little bit of fish sauce, salt, sugar palm, chicken powder and then mix them together for fifteen minutes. Next, put Noni leaves on the bottom of banana leaves that has a shape like a boat. Put the AMOK into it and steam it. When the AMOK is cooked, we put the coconut milk on top of it, and put some cilantro and red pepper on top. Lastly, prepare the rice and we are ready to eat.